Reindeer in the storm
Svalbard, 2015

For the first time, I traveled to Svalbard to photograph polar foxes. It was a few months after I left my job in the internet industry and threw myself into the uncertain waters of freelance work as a photographer and educator — and some success would have been useful to me at the time. But foxes have had a different opinion and have decided not to cooperate. On the other hand, coincidence brought reindeer in front of my lens, and I took advantage of that. I created a series of photos, which a few months later won an award in the Czech Press Photo competition. The series also included this image, which I took on the last day of our trip — the only day when the weather showed us its Arctic nature with frost and blizzard, in which the reindeer laid down and waited for bad weather to end. That afternoon we didn’t even want to take pictures anymore, but in the end, we forced ourselves to give it a try. Since then, I know it’s always worth not giving up prematurely. 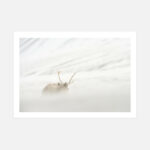